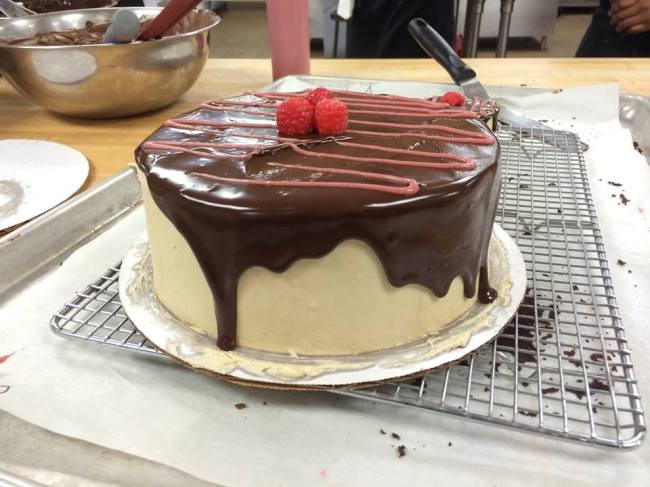 A few weeks ago in class we had a team cake interpretation. On the first day of class we were divided into teams of three and each team chose a cake to work with through the duration of of the quarter. We chose the fabulously decadent Chocolate Fudge Cake, for which I’ll post the recipe another day. At two points in the quarter each group is asked to make their cake again, but to reinterpret it. Last week we were required to include four out of five components in our cake: buttercream, jam, curd, ganache, and whipped ganache. We chose to make a Devils Food Cake with a whipped ganache, raspberry curd, espresso buttercream, and dark chocolate rum ganache. WOAH BABY!

This cake was insane…ly delicious! I brought a piece home for my husband and two for friends and it was gone as soon as I handed the pieces over. This cake got great reviews in class and from friends so if you’re in the mood for a fancy chocolate cake, give this one a try.

Preheat the oven to 325 degrees. Line the bottoms of three 8-inch round cake pans with rounds of parchment paper. Spray the pans and parchment paper with cooking spray.

In the bowl of a mixer, whisk together sugar, flour, cocoa powder, baking powder, baking soda, and salt. In a small bowl, whisk buttermilk, eggs and vanilla. In another small bowl, melt butter with hot coffee. Beat half of the buttermilk mixture into the dry ingredients at low speed, then half of the coffee mixture. Stop to scrape down the sides of the bowl. Beat in the remaining buttermilk and coffee mixtures.

Pour the batter evenly between the prepared pans and bake for 20 to 25 minutes, rotating the pans halfway through baking, until the cakes are springy to the touch or a toothpick comes out clean from the center of the cake. Once removed from the oven, let the cake cool in the pans.

Raspberry Curd (adapted from What She’s Having)

Puree raspberries in a food processor and strain out seeds with a fine mesh sieve. Mix the strained puree with sugar and lemon juice in a medium saucepan for 1-2 minutes on medium heat.

While raspberry mixture is heating, whisk the eggs and yolks together. Temper eggs by adding a small amount of the heated raspberry puree, then pour the egg mixture into the saucepan. Whisk constantly and heat on medium until the curd reaches 170 degrees F. Strain out any lumps before adding vanilla and salt.

While curd is still warm, fold in butter until it has melted into the curd. Let the curd cool to room temperature before covering with plastic wrap and chilling for at least two hours before serving.

In a small saucepan, stir together the sugar and water. Place pan over high heat, bring to a boil, cook without stirring, until the syrup registers 238 degrees F (soft-ball stage).

Meanwhile, whip together the eggs and egg yolks on medium speed for 5-7 minutes or until fluffy, pale, and light.

When syrup and whipped eggs are ready, remove the sugar from heat. On low speed, slowly add the hot syrup into the eggs, drizzling down the side of the bowl to keep the syrup from splattering and crystalizing.

Turn the speed up to medium and whip 6-8 minutes or until the mixture turns light and fluffy or is pale and the mixing bowl is just warm to the touch. Begin to add softened butter one chunk after the other until all of the butter has been added. The mixture will break and look curdled at first but will turn smooth and silky, do not be afraid! Once the buttercream has turned smooth, quickly add the espresso and salt and whip just until combined.

Place chocolate in a medium heat proof bowl. In a small saucepan, heat cream over medium-high heat until simmering (bubbles begin to form around the outer edges of the saucepan). Do not boil!

Pour hot cream over chocolate and let sit for one minute before slowly stirring the chocolate and cream together until melted and smooth.

To make the whipped ganache: The same measurements as above may be used. Once the ganache is made, place it into the refrigerator to cool. Check on the ganache and whisk every 5 minutes until is starts to become lighter in color and has more of a frosting-like consistency.

Note: Ganache should be made just prior to being needed so it remains viscous enough to be poured over something or smoothed as a layer.

To assemble the cake:

Place one layer of chocolate cake on a smooth, preferably raised surface. This can be an overturned cake pan or a cake pedestal. Fill a pastry bag with 1/4 of your buttercream to use as an outer edge on each layer of cake. Edge your first layer of cake with a small amount of buttercream. Then, using a cake/frosting spatula, spread a layer of whipped chocolate ganache over the cake, trying to keep the layer as even as possible. This layer should be no more than 1/2″ thick. Place your next layer of cake over the whipped ganache. Edge this layer of cake with a small line of buttercream. Using your cleaned spatula, spread a layer of raspberry curd over the cake, again taking care not to layer more than 1/2″. Add your final layer of cake over the curd. Use your cleaned spatula to form a crumb layer of buttercream over your cake. Refrigerate cake for 15-20 minutes. Using the rest of your buttercream, cover the cake. Refrigerate again for 15-20 minutes. Pour rum ganache in the center of the cake and use your spatula to spread the ganache just until it reaches the edges of the cake. Do this quickly as the ganache will begin to harden when it touches the old buttercream. Top with raspberries or anything else of your choice! 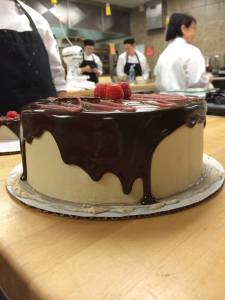